About ten years ago, I made some decisions about Bevin based on this line of reasoning: she is easily pleased, easily okay, even happy, with her world. She has an amazing capacity for optimism, moving on. And so I balanced the quality of my life against the quality of hers. And I've allowed myself some ten years of focus on the quality of my life--work, personal time, creativity, travel, peace, companionship. And to that end, I've paid attention to the quality of Bevin's life on a transactional, don't dig too deep basis. I think she's been okay. She's lived with folks who cared about her and did their best to take care of her. Jeraldine. East Side.

I don't want to revisit those decisions, flagellate myself with guilt, could have been, should have been. In important ways I think I was right. The last ten years, for all their limits and disappointments, have been important to me. I can't imagine not having them.

And I worry that the life she has been living recently has caused the balance of pleasure and anxiety in her life to tip. The anxiety rather than pleasure may predominate. She does have this talent for the moment, for affection, for pleasure. That is what I need to work to preserve. Bevin doesn't have the ability to manipulate her environemt. I can do that for her. I need to create an environment where she can succeed in what she does so well. Better than me--the normal. Live in the moment. Let go. Find pleasure.

If she loses that ability, it falls on those who create the world she lives in. What a responsibility.
Posted by SusanS at 7:53 PM No comments: 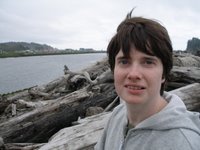 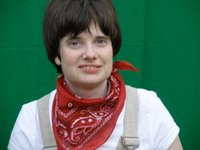 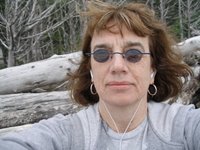 I've made some progress on bringing my beloved idiot girl to Seattle. I've filled out the paperwork. I've explored things to the point that I know I can take a leave of absence from my work when she comes. And I'm going to do this. I've made the commitment.

I spent time this week talking to the good people who run the group home where my daughter now lives--in Utah. I had a conversation with the administrator there that stunned me. I think of Bevin, my daughter, as having two extremes for coping with stress. On the one extreme, the anxiety builds up and she acts out. She runs around, can't settle. She becomes angry, grumpty, and she exhibits a range of alarming behaviors. She sniffs, she hits, she picks up things and stashes them in closets, she slams doors, she flushes the toilet again and again, she begs for soda and candy, opening the refrigerator door, raging if she doesn't get her way. At the extreme these behaviors overwhelm me. I don't know what to do. I have a hard time remaining calm, not becoming alarmed, angry, sad, tearful.

And then there's the other extreme. She lies down on a couch. Draws a blanket over her head. And sleeps. Goes into a deep quiety place that is something like a trance. I feel guilty when I let this go on too long. I want her engaged in the world. I love her happy smile, her affection, her openness to whatever comes next. I'm afraid if she goes too deep, she won't come back. She becomes less engaged, less the wonderful little person I know she is. I feel guilty, because this Bevin is so much easier to deal with than the other Bevin.

I was stunned because the administrator at her group home told me she had never seen the latter behavior. Only the former. And she told me something I found it hard to believe. Bevin has a hard time sleeping. Because of lack of sleep she is grumpy. And if anything this seems to becoming worse. She wakes up in the wee hours of the night, roams through the home, has even managed to get outside and set off the alarms.

I was stunned because I think of Bevin as someone with an amazing capacity to sleep, to descend into a deep quiet place. As I thought about this I realized that Bevin lives in a situation where she is always in a group. A group home after all. She has a roommate. The television is always on, a group of women/girls, a group of helpers. She travels on a bus with a group to "work"--spends the day with that group. I was stunned today to think that Bevin basically has no privacy. No time alone. She does need constant supervision. You can't leave her alone. She can't make any choices. But in her current life, this means she is always in a group.

Bevin definitely has anxiety in situations of transition, in crowds, in public places, in transitions, in noise. And in important ways I realize this is the structure of how she lives. No privacy. No time alone.

She has an amazing capacity to be happy. To live where she is. But that seems stressed.

I don't know what this means about where Bevin is right now. For the last few times I have spent time with her, she has been so pleasant. But I realize now how tired she must be, what a relief the quiet and peace of being alone, being able to put her head under a blanket and lose herself, must seem. Bevin is amazingly difficult to move out of a pattern. I wonder what imprint this time of living in a group, in a crowd, will have made on her. I can understand a certain kind of anxiety I see in her behavior now. But what might that mean overall in the range of life she can live.

This leaves me more committed to bring her to Seattle and to create a place where she can be alone, be quiet, be isolated. But in the context of a balanced life. What will this mean? How will she have changed? I look forward to this. I'm committed to this at this point in my life. But I am a bit afraid. What will this mean? And am I a big enough person.
Posted by SusanS at 6:05 PM No comments:

All in the family